Simulating Voodoo Correlations: How much voodoo, exactly, are we dealing with?

The recent article "Voodoo Correlations in Social Neuroscience" by Ed Vul and colleagues has gotten a lot of attention and has stimulated a great deal of discussion about statistical practices in functional neuroimaging. The main critique in the article by Vul involves a bias incurred when a correlation coefficient is re-computed by averaging over a cluster of active voxels that are selected from a whole-brain correlation analysis. Vul et al. correctly point out that the method will produce inflated estimates of the correlation magnitude. There have been several excellent replies to the original paper, including a detailed statistical rebuttal showing that the actual bias incurred by the two-stage correlation (henceforth: vul-correlation) is rather modest.

It occurred to me in thinking about this problem that the bias in the correlation magnitude should be related to the number voxels included in the selected cluster. For instance, in the case of a 1 voxel cluster the bias is obviously zero since there is only one voxel to average over. How fast does this bias increase as a function of cluster volume in a typical fMRI data set with a typically complex spatial covariance structure? Consideration of the high correlation among voxels within a cluster led me to wonder about the true extent of bias in vul-correlations. For instance, in the most extreme case, where all voxels in a cluster are perfectly correlated, there is zero inflation due to avergaing over voxels.

To explore these questions I ran some simulations with real world data. The data I used were from a study carried out on the old 4 Tesla magnet at UC Berkeley and consisted of a set of 27 spatially normalized and smoothed (7mm FWHM) contrasts in a verbal working memory experiment (delay period activation > baseline). The goal was to run many correlation analyses between the "real" contrast maps and a succession of randomly generated "behavioral scores". Thus, for each of 1000 iterations I sampled 27 values from a random normal distribution to create a set of random behavioral scores. I then computed the voxel-wise correlation between each set of scores with the set of 27 contrast maps. I then thresholded the resulting correlation maps at 0.6 (p = 0.001) and clustered the above-threshold voxels using FSL's "cluster" command. This resulted in 1000 thresholded (and clustered) statistical maps representing the correlation between a set of "real" contrast maps and 1000 randomly generated "behavioral scores". 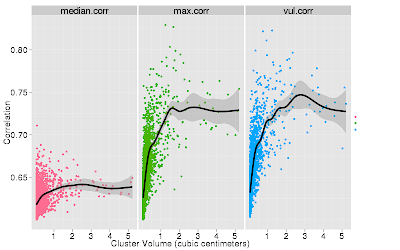 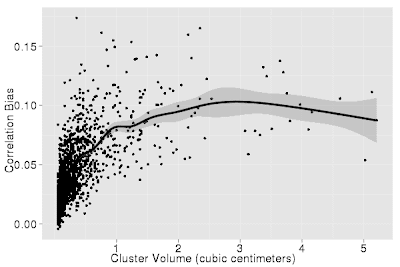 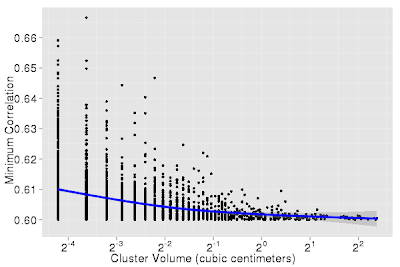 All in all, I think the problem identified by Vul et al. is a genuine one. Two-stage correlation estimates are inflated when compared to the median correlation within the cluster -- but not by that much. One reason for this is the high threshold required to achieve significance in whole-brain analyses yield voxels that don't have much room to go up. In addition, the constiuent voxels of a cluster are already highly correlated, so that the "truncation of the noise distribution" referred to by Vul et al. may be less than would be expected among truly independent voxels. So, perhaps, in the end the vul-correlation isn't so much a voodoo correlation as it is a vehicle for voodoo fame.

Posted by Brad Buchsbaum at 2:31 PM